The Head Start State Collaboration Office and the Fatherhood and Family Initiative is proud to present opportunities for fathers to come together and share their stories, provide feedback, support, and just learn from each other. These sessions will be offered three times a year in 2022. The latest research on fatherhood will be shared and access to great resources will be provided. Please complete this survey to help us plan for this event.  Arkansas Fatherhood Powerful Conversations Planning Survey (surveymonkey.com)

Please save the dates for the following upcoming FREE virtual events:

Get ready for the greatest hour of powerful conversations ever!

Please register using the link under each date.

UAMS and Arkansas Children’s Hospital are conducting a study of parent-child interactions. Children must be between 6 and 36 months. This study can be completed in your home, and there is no need to travel. You can be compensated up to $200 for completion of the study. You must have access to smartphone. Please see the flyer for more details.

Head Start Families: Don’t take the Summer off from Learning!

The 2020-2021 school year has ended and students are on summer vacation. During this time of fun and relaxation, we want to encourage parents and children to keep their brains active during the summer! Our Education and PFCE Team put together summer learning packets full of learning games, reading activities and resources to keep students actively engaged during the summer months. Some material included in the packets: Summer Resource Guide, ReadyRosie flyer with playlist, & Summer Soar Gameboard. As well as being fun, the activities included in the packets promote playful investigation, and learning. These activities are perfect for keeping children learning all summer long.

We also included the Kindergarten Readiness Indicator Checklist for Parents (English & Spanish) so parents can continue working with transitioning students during the summer break. Use this Kindergarten Readiness Checklist to make sure your child is prepared for Kindergarten.  At UAMS Head Start/Early Head Start, our goal is to help your child get ready for success in school and life.  We want all 4 and 5 year-olds transitioning out preschool to have the skills they need. These skills include language, thinking, social and emotional skills, pre-reading, math and problem-solving.  We work with Little Rock and the surrounding school districts to find out what our students need to learn before entering Kindergarten.  We also work with families and children to ensure a smooth transition between Head Start and Elementary School. 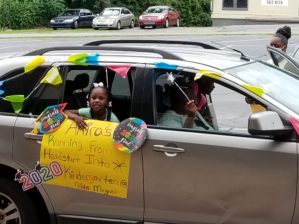 A student at Southwest Head Start lets everyone know she is transitioning from Head Start to Kindergarten during their End of the Year Celebration. 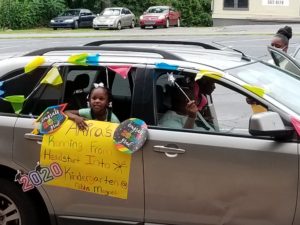 Mr. Ahmed Hashoosh sat down with our staff to talk about his daughter Ghadeer’s progress since enrolling in Head Start. Ghadeer is a dual language learner, learning Arabic and English.

Mr. Hashoosh says, “you can’t imagine my daughter before she came to this program.” Her parents had concerns about Ghadeer’s development and learning and the doctor referred her to Head Start in the winter of 2017. She started in the spring and within the first three weeks her parents saw a lot of improvement. Ghadeer started to feel more comfortable in school and around people. During the summer break, she asked her parents to bring her back to school. She had made friends and wanted to see them again.

Her father tells us, her “teachers treated my child as their child.”  She started talking to her parents, she learned rules and routines. When her dad came to pick her up early, she told him he couldn’t pick her up yet because she was not finished with the school day. She liked to follow her routine.

“Day by day, week by week, we saw my daughter as somebody on the stairs. She progressed very well and faster than what we expected, Mr. Hashoosh tells us. “Now she talks to others and tries to play with other children. We don’t know what we would do if we didn’t have this program because when she was one and a half years, we notice she doesn’t like to talk, she likes to watch TV. I felt that my daughter didn’t care that I was her father, she didn’t pay attention when I left the house. My friend told me she needed to be around other children and people. I saw my daughter get better and better.”

Ahmed ends by telling us, “Because of your work and focus on my daughter I genuinely feel happy. Now I feel she has self-confidence and she trusts herself and she got that from this program. Her teacher doesn’t just teach her words or how to read only, she teaches her everything related to normal life: how to deal with people, how to have respect, how to eat, how to use the restroom, how to wash her hands, how to sign herself in and out, and how to share with others.

Thank you to Mr. Hashoosh and your family for sharing your story with us.  We wish you all the best in years to come.

Mrs. Jessica and Mrs. Samantha have implemented strategies and techniques learned from Conscious Discipline within their classroom.  They have established a new safe place where they can explore their feelings and calm down.  In the bucket, you will see fidget toys as well as a writing book that can be used to write (draw) a letter to mom, dad, or the teacher about how they are feeling.

They also have a “wish well” visual for the children to wish well to those who are absent along with an “oops” chart.  The children agree to social norms that they will commit to for the day and their name is placed next to that commitment.

“Head Start is not just for children, it’s for the whole family.”

Wanda Corney brought her son to Highland Head Start in 1989 when he was 4 years old. At the time she also had a 6-month old baby. She would take her son to school and stay with him in the classroom all day to volunteer and spend time with him.

Her involvement grew from the classroom to becoming the secretary for the Parent Committee. At the end of that school year in 1990, she received a Parent Volunteer Award and the director at the time, Ora Russel, asked her if she wanted to work as a Teacher Assistant in the program.

Wanda was hired as a TA in September of 1990 when Head Start was under Cope. She worked as a TA from 1990-1992. In August of 1992, she attended ASU Jonesboro CDA program and a was promoted to a Teacher at Silver City Head Start. Her career continued with Head Start and in 1994, she became an FES, known then as a Family Advocate. She worked as a Family Advocate at Chicot Early Head Start from 1994 to 1998 and experienced the organizational changes from Cope to CADC to UAMS (Dec. 1998). In 1998, Wanda became the Site Manager for Chicot Early Head Start and in 2006 she helped to open Southwest Head Start as the Site Manager.

During this time, she went back to college and received her Bachelor of Arts in Early Childhood Administration from Philander Smith College. She graduated with a 4.0 GPA and a Presidential Honors. In 2011 Wanda achieved an MBA from University of Phoenix with a GPA of 3.5.

Wanda moved on from working in Head Start in 2012, but she never left us. She went on to work for Early Head Start Arkansas Human Development Corps. As their Program Director in April of 2012. In 2014, she worked for HIPPY as a Maternal Infant Early Childhood Home Visitor. At this time, Wanda is the State Manager for the Parents as Teachers Program at Arkansas Children’s Hospital.

Wanda has been a member of UAMS Head Start and Early Head Start Policy Council since 2015, when Eva Williams asked her to join. All four of Wanda’s children attended Head Start and 3 of them graduated from high school. Her daughter is graduating from Arkansas Baptist College in May 2018. Wanda speaks highly of the people she has worked with in Head Start: from Ora Russel to Francis Lawson and Arby Kelly, who saw the abilities and skills she brought to the program and provided encouragement for her to continue in her education and her career.

As a Head Start employee, Wanda often times brought her children to the classroom and they would help out. They enjoyed working with her students and being of service to the program; her daughter even subbed at our program. Wanda also has two step daughters who worked as volunteers and one of them worked for the program as well. She now has a grandson who attended Metro Head Start with Ms. Parr and Ms. Neville; he is now on the honor roll at Little Rock Prep. When he first started there, his teachers asked his mom where he had gone to school and noted that he was well prepared for Kindergarten.

Looking back on her time working with Head Start, Wanda had nothing but good things to say about our program. She continues to send people here to get jobs. Wanda’s advice for families is to “be a supportive parent, go in the classroom, get to know the staff and the program. See what they offer. Head Start is not just for children, it’s for the whole family. If families become involved they will accomplish the programs mission.” She also encourages families to “get involved in the Parent Committee, it makes a difference for your child.” When Wanda sees families in the community, her first interaction with them is to find out how old their children are. If they are 6 weeks to 5 years, she tells them what UAMS Head Start and Early Head Start can offer their children and family.

If Wanda had not become involved in Head Start, she would have become a CEO of a business. Instead, she is able to use her education and skills to empower children and families living in poverty. What a gift she has been to us and our community. Wanda jokes that even when she tries to leave early childhood education, she always ends up back working with children and families. One of Wanda’s greatest joys working for HeadStart was helping families set goals and seeing the look on their faces when they achieved them. She felt she was helping families achieve things they may not have been able to do otherwise. She inspires us with these words, “You can always make a difference in someone’s life.”

The Early Head Start and Head Start Programs at Methodist Children’s Home hosted Channel 11’s Craig O’Neil to read How the Grinch Stole Christmas to the children. Ms. Abby from the Clinton Children’s Library also joined in on the fun.

We want you to be informed about the Flu and how to keep your children and family safe during flu season.

Here’s what families had to say about our program: